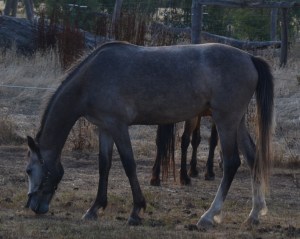 We are very pleased to announce the arrival of our new filly, Woodstock Deltora.  She was of particular interest to Dylanglen Stud because her Grand-Sire is Blandings Biscuit.  Connaught of Millfields is therefore her Grand-Sire.

Deltora is related to one of our foundation Connemara mares through Blandings Biscuit, Lugano Queen of the Fairies (Queenie).  A nice solid 14.2h bay mare with the most exceptional temperament we had ever come across (refer to about page).  We are so excited to have a pony that is so closely related to Queenie and we have been looking for a long time.  Deltora already reminds us of Queenie a little in the way she likes to follow you around the paddock.

Connaught of Millfields also happens to be the Grand-Sire of Green Hills Go Go Gal, the other foundation mare of Dylanglen Stud.  Go is a very treasured memory to our stud and is the dam of Dylanglen Shamrock.

It is also fortunate that on her dam side she is related to Celtic Sweet Katie.  The Grand-Sire of Deltora is Springfield Devereux, who is also the sire of Celtic Sweet Katie (Sweetie).  She was the sweetest pony, her nature taking after her name.

Deltora will mature approx 14h, hopefully taller.  We envisage that Deltora will remain at Dylanglen Stud until she retires.